Founded in 1987 from an amalgamation of Windsor RFC (founded 1922) and Old Windsorians RFC (founded 1925). Let us know if you have any archive material that you can supply to us digitally. 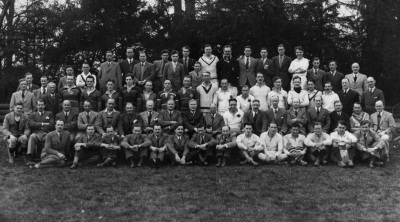 Windsor Rugby Club has a rich (and unique as you will see) history and for many current players much of this will be unknown.

The club you all know is hewn from two separate clubs – the Town club (Windsor with our clubhouse being the one we all know and love) and the Old Boys Club (Old Windsorians – what sadly is now the Montessori School).

In an attempt to be even-handed I have tried to get a perspective of our histories from a member from both clubs…Will Beckett, Life Member, the First Chairman of the amalgamated club and quite simply one of the funniest and nicest men ever to don a cleated boot, gives this Windsor perspective and …well I’ve asked several Old Windsorians for their version but I suspect they’re still trying to find someone who can write!

Six months later and sick of waiting, I’m bunging Willie’s meisterwerk in and hope that it’s a catalyst for one of the Windsorians to step forward for our next edition…Willie, it’s over to you…

A brief history of Windsor RFC.

There was a Windsor RFC as early as 1889 but disbanded in 1895. They played in red and green strips. The Windsor Rugby Club as we know it was formed on May 9th 1922. The inaugural Meeting was held in the Guildhall. The first A.G.M.  Was held in Sept 1922 at the Bridge House Hotel Eton (now demolished) the Club colours were white shirts and shorts, subscription was 5 shillings a year (25pence today) this continued until 1950 when it went up to £1.00.

1926-27 season  opened with the Club in its new headquarters at the Castle Hotel.
On December12th 1936 H.R.H. the Duke of York succeeded to the throne as King George VI. He continued to honour the Club as Patron. I think I am right when I say there has never been a King as patron of any other Rugby club, or indeed a Union. This is something we should all be very proud of. The Club recommenced activities after the war with the HQ still at the Castle Hotel HM King George VI was Patron. A large number of members served in HM Forces and sadly 13 did not return.

1951-52 saw the death of our Patron H.M King George VI and as a mark of respect the Club played no games at all on Saturday following and played with black arm bands the following week. H.R.H. the Duke of Edinburgh honoured the Club with his patronage at the beginning of 1952-3 season. The Windsor first VII almost made the Middlesex 7s Finals when they went down 8-11 to London Irish at Teddington, after two periods of extra time. In the Irish VII were Irish Internationals G.M.D.Archer and C. Griffin. In the Windsor side were Bill Manger and Harry Dawson who are both regular supporters of the first team today.

1961-2 Saw the official opening of the Clubhouse in the Home Park by H.R.H. Prince Phillip, the Duke of Edinburgh, Patron. On a lighter note the 1970s saw Catholic priest Father Peter Doyle (now BISHOP of Northampton) play for Windsor (the brothers Brooke (Eng not NZ) remember him conducting Mass on a Sunday with a variety of injuries).

1980 Easter saw Windsor going on tour to the USA.  Itinerary for Tour.

1987-8 season saw the amalgamation of Windsor RFC and Old Windsorians RFC into the present Club. We had joint Presidents in Eric West OW’s and Bob Divall WRFC.  Chairman myself W ill Beckett.

Above has given you a small insight into the very proud history of Windsor RFC. As I recall the amalgamation had two principal people steering the move in Charlie Mills WRFC and Murray Hyde from OWs. The amalgamation was not unanimously agreed by any means… I myself took a bit of convincing as the majority of my most memorable and fun days were with WRFC.

As you can imagine, with two clubs on each others’ doorsteps like that there was an incredible rivalry, not always that friendly if we are to be honest about it (particularly on Churchill Cup day when all of our respective teams played each other…ouch!), but the catalyst for this was the advent of league rugby – until 1987 all rugby was played on a friendly basis with a fixture list that was cultivated over the seasons and the County Cup being the only truly (officially) competitive event.

At that time Windsor RFC fixture list included Wasps Second fifteen, Rosslyn Park Seconds,  Northampton Seconds and many other top clubs.   It seems hard to believe now, but this was the case of all clubs, at all levels throughout rugby in the UK, until this landmark year and with the thought that Windsor was just too small as a town to have two competitive clubs the idea of joining together was given fruition… many meetings were held and many points of view put forward until it was decided that the amalgamation should proceed.

It was agreed prior to the joint AGM that the Presidency of the new Club would be joint, with Eric West the OWs President and Bob Divall the WRFC President sharing the role. At the AGM,  two young men, well young compared to me ( Tony Brooke and James Noakes ) approached me and asked,  if I was put forward would, I stand as Chairman, this I agreed to and to my surprise was elected Chairman, and remained so until 1991 when I was elected President for three years.

To many of you reading this, you will have only known one club, and a great club too, and I think on reflection it was the right thing to do for the future of rugby in Windsor.  When you look at the great work done with the Minis and Juniors it is not only good for WRFC but good for rugby as a whole.

WRFC to me, both old club and new, has been not so much a club but more a way of life.
The friends I made in rugby will be with me for life, and when you get to my age you too will look back at your days at WRFC and realize just what a great place it is.
We must look forward as that is the future… but not forget the past.